What are the Arkansas Car Seat Laws?

You have found the right place if you want to brush up on the latest car seat laws in the state of Arkansas.

Since we’re traveling a lot, I have to look up the car seat laws frequently. Plus, I have 3 adorable angles (only while they sleep), so I have no choice in the matter. Luckily I used to be a paralegal before my kids, so it’s easy for me to find and interpret the law.

I know there are many sleep-deprived parents on my website, so I’ve decided to create this article using simple words, so you will know exactly how to keep your kids safe and avoid those hefty fines.

No matter what you’re looking for, I probably have the answer below. Maybe you’re interested in the booster seat law, or maybe you want to know the rear-forward facing car seat situation, or you have to know if taxis are exempt? Then you will find the answers below. 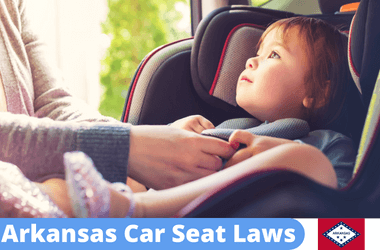 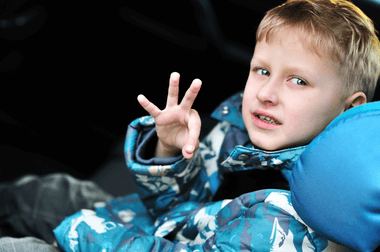 According to the booster seat law in Arkansas, all kids under the age of 6 or weighing under 60 pounds need to be in the appropriate car seat. This would mean a booster seat.

Now According to Arkansas State Police Highway Patrol Division, they advise keeping kids in a booster seat until the age of 8 or they reach the height of 57 inches.

There’s no exact law on how long you should keep your child in rear-facing, however, some states require until the age of 1 and others the age of 2.

We all know that rear-facing is the safest way for our little ones to ride, so make sure you use it as long as possible. I highly recommend the age of two or longer.

Again for this section, there’s no accurate law, so you have to rely on the manufacturer’s recommendations. This means that after your child has outgrown the rear-facing seat, you can choose the forward facing one.

In the state of Arkansas, are exempt from the car seat laws mentioned above. However, they mention that the taxies or ride-sharing vehicles have to give enough time for you to install your car seat properly.

When Can My Child Sit in the Front Seat in Arkansas?

There’s no law dictating when a child should sit in the front seat if we look at neighboring states, they recommend kids who are older than 12-13 years old.

Law: All kids under the age of 15 have to be properly secured in the vehicle with the appropriate car seat or seat belt.

Location in car: There are no specifications on where a child car seat should be.

Taxi: Taxis are exempt from the above car seat laws. This doesn’t mean it’s the safest option, so if you want to be worry-free, bring your car seat with you.

What is the law concerning Leaving kids in the Car in Arkansas?

There’s no law governing if you can leave a child unsupervised in the car. However, there were 17 deaths between 1998-2018 because children were left alone on hot summer days. Also, there were convictions in these cases because of neglect.

Is it Illegal to Smoke in a Car with a Child in Arkansas?

According to the Arkansas Protection from Secondhand Smoke for Children Act of 2006 Section 20-27-1903 it is illegal to smoke in front of a child under the age of 14. Second-hand smoke is known for causing illness.

We have reached the end of this article. I bet you have already found the answers you’ve been looking for.

I’ve done my best to provide you with the most up-to-date info and avoid lawyer talk. I know that most people get bored of the dry language of the law. That’s why I’ve helped out.

If I happened to miss something or you have questions, then let me know, and I will do my best to help you out.

What are the booster seat laws in Arkansas?

When can a child ride in the front seat in Arkansas?

There’s no law when a child can sit in the front. The only law that is related to this is if a child is older than 6 or weighs more than 60 pounds, then they can use the seat belt.

However, neighboring states recommend 12-13 years of age if a child wants to sit in the front.

How old does a child have to be to not use a car seat?

In the state of Arkansas, after the age of 6 or weighing more than 60 pounds is the limit when a child won’t need a car seat.

Can a 6-year-old ride without a car seat?

Yes, in the state of Arkansas, a child above the age of 6 can ride without a car seat.

According to arkansas car seat laws booster seats (booster car seats) if the child is under six and weighs less than sixty pounds they need to use the appropriate  child passenger safety seat (child passenger safety seats, child safety seat). In our case it would be the booster seats. These car seats as in booster seats can be secured with seat belts (car’s seat belt),  or shoulder belt.  Also what the car seat laws in arkansas say is that a safety belt properly secured to the vehicle is sufficient to protect in a car accident.  Yes even the backless booster car seats are considered as a child safety seat. So yes this is what we get from the seat laws in arkansas.

Where can I find the child passenger protection act?

When can a baby face forward in a car seat in Arkansas?

According to Arkansas child seat laws 2022 there’s no specifics so in this case we have to rely on manufacturer’s recommendations. In this case as soon as your baby has outgrown their rear-facing car seat they can upgrade.

Can a 7 year old sit in the front seat in Arkansas?

Yes, according to Arkansas carseat laws there’s no rule when a child can sit in the front seat. However it’s advised to wait until the age of 12-13.

What age can child use booster seat?

According to booster seat requirements Arkansas children below the age of 6 have to be in a proper car seat (booster seat). However the state police recommends the age of 8.