Car Seat Laws in the USA

Since we’re traveling a lot, I’ve put together this no-nonsense easy to use guide for car seats. Best of all, I’m using simple language so anyone understands it even the most sleep-deprived parents can grasp it.

I have intentionally skipped lawyer talk and translated it into common language so you don’t have to find a lawyer to make sense of these laws.

Not only will you learn exactly how to properly secure your child in every state but also I will share with you RV and seat belt rules as well.

Scroll below to find the right state’s car seat laws… 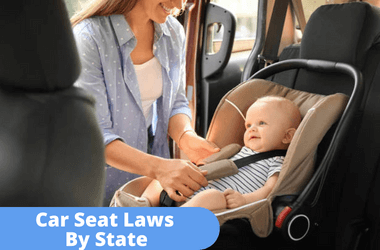 Every state has different infant seat rules. You can read more by checking out the particular state you’re interested in.

In general, these are the main recommendations for infant seats.

Parents should keep their children in an infant car seat for as long as possible. Rear-facing car seats offer more protection for the child in the event of a collision.

The height and weight restrictions are usually printed on the car seat by the manufacturer, so parents and caregivers need to pay attention to these limits. When a child outgrows

Infant car seats are the safest by far. They have the most protection plus they are rear-facing.

If your child has outgrown their infant seat, they should switch to the next stage which is a rear-facing or convertible seat.

Ideally, infants and children should travel in the back of motor vehicles. Children who are in a car seat should be placed in the middle of the backseat.

When it comes to car seat laws, the United States is a bit of a mess. There are various laws in place in different states, and even within states, the laws can vary from city to city. So what are the basics?

There are weight restrictions for kids who ride in these car seats, and these restrictions are typically printed on the car seat itself. In most cases, the weight limit is 20 lbs.

For example in Europe in some countries kids have to ride rear-facing until the age of 4. This is how important it is to keep your kids rear-facing.

Even though the law states that you can upgrade when your child reaches 20 pounds you can keep them rear-facing longer.

Also here’s something that nobody tells you. As you upgrade to the different stages the car seats provide less protection than the previous stage.

As a parent, it’s important to be aware of the car seat laws in your state. Each state has its own regulations governing when children must switch from a rear-facing car seat to a forward-facing one, and when they are allowed to use a booster seat.

In most states, children must remain in a forward-facing car seat until they reach the age of four or weigh 40 pounds. This can be a difficult rule to follow if your child is close to reaching the weight limit but not quite there.

Some states have laws that allow children to remain in a rear-facing car seat until they are five or six years old.

Forward-facing car seats are great because they have the 5-point-harness that offers the most protection possible.

Booster Seat Laws in the USA

Booster seat laws are as versatile as the rest. Some states allow for kids the graduate earlier while others don’t.

Typically kids have to be in a booster seat between the ages of 4 and 8. Or some states require a certain weight or height.

Basically your child can ride without a booster seat if the seat belt fits perfectly and doesn’t go through the neck or face.

If your child has just reached this stage then I highly recommend getting a high-back booster seat. These car seats offer more protection plus they might be even tiltable so your child’s head doesn’t flop.

Eventually, when your child is big enough, you can only use the booster option only.

Around the age of 8, kids can ride without a car seat if the seat belt can be positioned correctly.

Also I want to add that even though a child might not need a car seat at the age of 8, it’s highly recommended that only after the age of 13 do they ride in the front. Some states have explicit laws while others don’t.

What age can children use a booster seat?

In most states children should use a booster seat between the ages of 4 and 8. However there are a few exceptions that recommend until the age of 12.

What age do I not need a car seat?

Some states require the age of 8 or the height of 80″. This means that the child can safely and comfortably use the car seat belt.

Can a 4-year-old sit in a booster seat?

Yes, a 4-year-old can sit in a booster seat if they meet the minimum weight and height requirements.

At what age do kids stop using car seats?

It depends on the state you’re living in. Some states have strict rules like a certain age while others are much loose like when the seat belt can safely secure a child. Reference answer to when do kids stop using car seats.

Can you put a car seat in the front seat?