What Is the Safest Place for Car Seat? – Expert Answers

Welcome to the Ultimate Guide on showing you which is the safest place for your child’s car seat!

I have the car seat now what? Where should I mount it so it gives the best protection possible? These are one of the most common questions I get asked from parents.

I know there are compromises. Heck every parent is doing it or there would be endless tantrums and screaming still this is no joke.

The car seat won’t offer the maximum protection if it’s not installed properly or at the wrong place. I’m a mom of 3 so it’s not my first rodeo so I thought it will be helpful if I share my expereience with you.

Plus I will reveal exactly why the middles seat is the safest no matter what kind of car you’re driving. And also I will share some tips on what to do if you have more than a child in the car.

Show it to me already! 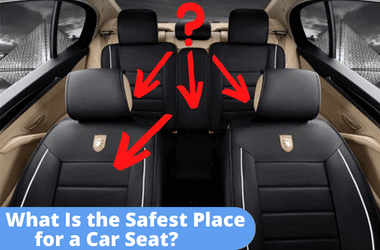 The Safest Place for a Car Sear

The center backseat is the safest place for a car seat, whether it’s rear-facing or forward-facing.

Keeping the car seat away from the sides is necessary because it keeps the baby away from impact in case of an accident. But that’s not the only reason the center seat is the safest place.

Another reason is keeping the seat away from any active airbags.

On top of that, the center seat allows the parent sitting in the passenger seat to check on the baby constantly with ease.

What Is the Least Safe Place for a Car Seat?

The least safe place for a car seat is up front, close to an active airbag.

Letting an airbag unleash with a baby’s seat in the front can be more dangerous than the accident’s impact.

The airbag unleashes with extraordinary power, which will directly hit the car seat and possibly cause neck or head trauma to the child using it.

In fact, it’s illegal in most states to position the car seat that way, so it’s out of the question either way.

The only case where you can put the baby’s car seat in that position is if the car’s airbags aren’t active. Some cars also have automatic switches that deactivate the airbag when a child seat is put in the front, so these will allow you to position the car seat.

However, it’s the least safe place in the entire car, so it’s not recommended at all to use it unless you absolutely have to.

Can a Car Seat Go in the Middle?

Yes, a car seat can go in the middle. In fact, it’s the safest position for a car seat because it’s far from all sides, so if the car gets into a collision, the seat won’t get hit or flung. It’s also away from the airbags that way.

Not to mention, putting the car seat in the middle grants easy access to the parent sitting in the front to check on their child.

Does the Car Seat Go Behind the Driver or Passenger?

Even if there’s no other child in the car, you may have two car seats, so one of them will inevitably go on the side.

So, should it be behind the driver or the passenger seat?

The car seat should go behind the passenger rather than the driver because there’s a high chance the seat will be empty. So, when the seat is empty, the impact won’t hit the baby’s car seat as hard because the empty space will cushion it.

But of course, you can never know if it’s safer than the driver’s side because the collision may be on either side. And in all cases, the side that gets hit in the collision is the least safe one, but you don’t know which one it is. That’s why it’s often better to avoid these two seats.

What If You Have Two Car Seats?

If you have two car seats, you either have twins or two toddlers close in age. If they’re not the same age, it’s better to position the younger baby’s seat in the center. The other seat will then go behind the passenger seat.

If they’re twins, it won’t make a difference which seat goes where as long as you don’t place any of them in the front or behind the driver’s seat.

In case the two seats aren’t matching, as in one is forward-facing and the other is rear-facing, you’ll have to go about this differently.

What Is the Safest Place for a Car Seat in SUV?

Some SUVs have three rows rather than two, which may be confusing when you’re about to strap your baby’s car seat in.

Well, SUVs are the same as sedans; the center seat is the safest. So, you’ll want to put the car seat in it. However, some SUVs have two separate seats in the second row, so there’s no center seat to put your child on.

In that case, put the car seat in the third row’s center seat. Preferably, have an adult ride in the back with the seat because the parent sitting in the passenger seat won’t be able to access the car seat to check on it.

If your SUV has a bench in the second row, you’ll have no issues placing the seat in the center.

Conclusions on What’s the Safest Place for a Car Seat

It’s essential to learn about the safest place for a car seat because that’s the whole point of having a seat in the first place.

If you have a seat, but you put it unsafely in your car, you’re putting the baby at high risk in case an accident occurs.

It’s always better to be safe than sorry, so make sure you study all possible positions and buckle your child ’s seat in the safest one to ensure his safety.

Maybe you can help me out with something. Can you please share on social media which part of this article helped you out the most?

Thank you it would mean a lot for me.

Should car seat go behind driver or passenger?

It can go on either side there’s no difference between driver or passenger. I personally put mine behind the passenger because I always park on the right side so there’s no traffic when I’m putting in and out my child.

Which side of the car is safest for car seat?

The safest for the car seat is in the middle. It’s at maximum distance from airbags and gets maximum protection from T-bone accidents as well.

Why is the middle the safest for a car seat?

The Middle is the safest because the data provided from accident reports show that children sitting in the middle are 43% less likely to suffer any injuries. Simply because the middle car seat is at the best distance away form airbags and there’s no way to suffer direct damage even from the T-bone accident.

Is the middle seat the safest for a car seat?

Yes the middle seat is the safest for a car seat. Since it’s far away from any direct impact and airbags as well.

Does car seat go behind driver or passenger?

It can go behind the driver and the passenger there’s no difference. Either way the safest place is in the middle.

What’s the safest place for car seat in back seat?

On the back seat the safest place for a car seat is in the middle. There’s ample protection on all sides so a child can escape unharmed.

What is the second safest seat in a car?

The second safest seat in a car would be the second or back row. Since the middle is the safest both sides are safe with the possibility of side impact which is not possible in the middle.

What’s the safest spot for booster seat in car?

For a booster seat the safest spot would be the middle. If there’s a smaller child then of course they should take the middle seat.

Yes no matter if you have rear facing car seats or a convertible car seat (convertible seat) or an infant car seat or an all in one car seat the rear seat is the safest and in the middle spot it’s also called the bench seat. This spot is highly recommended by car seat safety technicians and the front seat should be avoided at all costs.

Most car seats can be easily installed let it be in rear facing position (rear facing child seat or child rear facing car seat)  or forward facing position (forward facing child seat). However a car seat properly to be installed you need to check the height and weight limits and always use the rear passenger seats. The harness straps have to be snug. With booster seats you can use lap only belt or the lap and shoulder belt (shoulder seat belts). The lap belt and the seat belts are at the last child development phase.

What is the safest seat in a car?

The safest seat in a car is in the center of the back row if it has a 3 point shoulder belt. This position is the safest because it’s protected from impact on all sides. Older cars might have a lap belt for the center seat so the sides would be the second best option.