What is the North Carolina Car Seat Law? 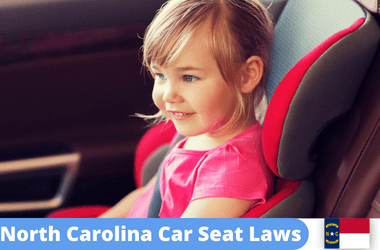 You have found the right place if you want to brush up on car seat laws for the state of North Carolina.

Being a mom of 3 perfect angels (maybe while they sleep) plus traveling a lot through state lines, I had no choice but to learn the car seat laws.

The good news is that I used to be a paralegal before I had my kids. This means that I know how to find the right laws, plus I can translate lawyer jargon into something that anyone can understand.

You see, this is why I’ve created this article to help out parents who are sleep deprived and not just. I promise you that there will be only simple to understand and actionable stuff below.

You might be interested in just a few questions, no worries, I have that covered as well. Maybe you want to know what the booster seat law is, or when a child can sit legally in the front, or will you need a car set in a taxi. All this and more are answered below. 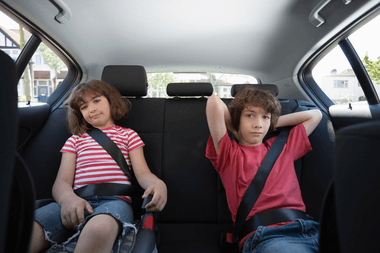 According to the booster seat laws in North Carolina, kids who have outgrown their forward-facing car seats have to transition into a booster seat. This usually happens around age 4.

They can use the booster seat until age 8 or below 80 pounds. Then they can upgrade to the seat belt.

However, if the seat belt doesn’t make the right fit, then the booster seat can be used even after the age of 8 or being above the 80 pounds weight limit.

The rest of the car seat law turns into a blanket one. So under the age of 8, you have to find the appropriate car seat which is federally approved.

This means that your little one has to be rear-facing until they reach the weight and height limit set by the manufacturer. The typical limit is either 1 year of age or 20 pounds.

Also, experts recommend keeping kids rear-facing as long as possible, and they advise that kids should be rear-facing until the age of 2 because that’s the safest way for them to travel.

Again from the blanket law, we conclude that once kids reach the max limits for the rear-facing car seat, this will happen during the age of 2.

So forward-facing car seats are typically used between 2 and 4 years old.

According to the law, kids under the age of 5 have to be secured in the back seat if it’s available.

According to the law, taxis and ride-sharing companies are NOT exempt from the car seat laws mentioned above. This means that you either bring your own car seat or arrange it ahead of time.

When Can My Child Sit in the Front Seat in North Carolina?

According to the law, kids under the age of 5 or 40 pounds have to be secured in the back seat. Also, experts recommend that only kids above the age of 13 should be sitting in the front.

Law: According to the law, all kids under the age of 16 have to secure with the appropriate car seat determined by age, weight and height the following way:

Location in car: According to the law, kids under the age of 5 and fewer than 40 pounds have to be installed in the rear seat unless the car seat has been designed to work with airbags.

Taxi: Taxis and ride-sharing companies are not exempt from the car seat law. This means that either you bring your own car seat or arrange it ahead of time.

What is the law concerning Leaving kids in the Car in North Carolina?

There’s no statewide law that would ban leaving a child unattended. However, Greensboro has made it illegal to leave a child alone for any period.

Is it Illegal to Smoke in a Car with a Child in North Carolina?

There are no laws that would ban smoking while transporting kids. I strongly suggest that you hold off smoking while driving kids because secondhand smoke is a known disease agent.

We have reached the end of this article. I believe, that I’ve kept my promise and delivered the laws in a simple understanding manner.

By now, you should know exactly how to protect your kids and avoid those fines.

Suppose you might still have questions, then reach out to me, and I will do my best to help you out.

If you’re going to South Carolina here’s what you need to know about car seat laws?

There are looser and stricter states when it comes to keeping kids safe on the road. No matter your preferences here you can find the latest South Carolina car seat laws explained in simple English.

What is the law in North Carolina for booster seats?

A child who’s under the age of 8 or weighs less than 80 pounds has to use a booster seat. It’s stated in the booster seat law in North Carolina.

What is the age and weight of a booster seat in NC?

The upper age and weight limit for booster seats in NC are 8 years and 80 pounds.

When can a baby face forward in a car seat in North Carolina?

There’s no exact law in North Carolina when a baby can start using a forward-facing car seat North Carolina. However, following the manufacturer’s suggestions, it would be 1 year old.

Can a 7-year-old ride without a car seat?

No, a 7-year-old can’t ride without a car seat in North Carolina unless they are over 80 pounds.

When can the lap belt be used?

The lap belt can be used after the age of 6 or reaching the height of 4 foot 9 inches.

A child passenger safety technician is a certified professional who can help you pick the right child restraint let it be a convertible car seat or booster seats. Also they can explain the north carolina car seat child restraint laws. Also they can show you how to use a properly fitted lap belt, how to install rear facing car seats, child passenger restraint system. Or even they can advise you when can you use the lap and shoulder belt  and when it’s properly fitted seat belt (seat belts).

What does the north carolina car seat say about rear facing car seats?

What are the the nc front seat laws?

There are no specific laws in North Carolina about front seat passenger safety. However, the general rule is that children under the age of 13 should ride in the back seat.

Booster seat laws in North Carolina are different than federal laws. All states are required to follow the federal guidelines.

How old do you have to be to sit in the front seat in north carolina?

There is no specific law in North Carolina about front seat passenger safety. However, the general rule is that children under the age of 13 should ride in the back seat.