Are You Curious What’s the Best Double Din Head Unit Under $200?

Just like other tech things, like phones and computers, head units are evolving as well. It’s great that we now have head units that can surf the internet and do this and that while I’m in the car. The problem is that the prices are also going up with it. A double din head unit can easily cost $4-500 today, which is not something most of us want to pay.

So, I went on a mission to find the best double din head unit under 200 which was still decent and would feature the most important things. I am happy to say, that I found the Pioneer AVH-590BT to be just that. 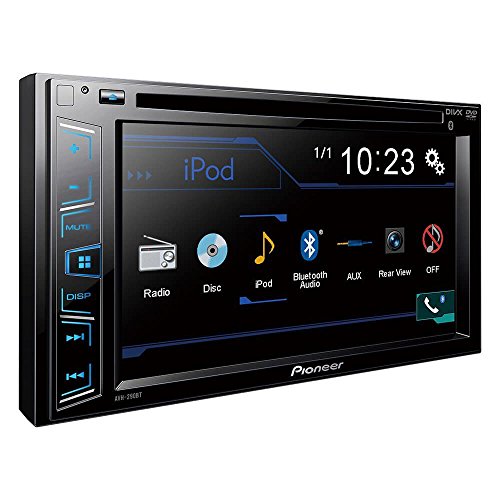 Before we talk about all the features and technical stuff that makes the Pioneer AVH-290BTsuch a good choice, let’s talk about the head unit itself and its specifications. On the front, it houses a 6.2” touchscreen monitor where you control the head unit. There are also a few buttons on the side to make it easier for you while driving. This is much more apprenticed then you would think as having to fiddle with a touchscreen while driving is insanely hard without losing focus on the road.

Because it’s an AVH-model, it has room for a DVD or CD if you prefer those old things. For those of you who are more modern, it also has Bluetooth and it doesn’t matter which phone you have since it supports both iPhone and Android. Of course, it also has the standard USB and AUX, both on the back.

Something else that you can find on the back is a rear view camera input. This is not something that I did expect to find on a head unit at this price and it’s great for those of you who are looking to get a rear-view camera now or in the future.

When it comes to audio, the built-in amplifier produces a max wattage of 50W over 4 channels, like most other head units. The RMS is standard at 14W per channel as well. There are 2 2V RCA Preouts to be used for external amplifiers such as for your subwoofer or for an external monitor.

What Makes the Pioneer AVH-290BT the Best Double Din Head Unit Under 200?

The Pioneer AVH-290BT is sharing many of its specifications with other double din head units, so what is it exactly that make the 290BT better than others? Well, first off, it’s the brand. Pioneer has been in the game for so long, that almost anyone knows who it is. In other words, it’s a recognizable brand. It doesn’t mean that they are better than others, but they are doing something good to be in that position. Also, support is usually better with big companies than smaller ones.

The user interface in Pioneer’s head units is very intuitive and easy to navigate. It’s clear where things are and what they do. The head unit comes with a microphone that you can attach close to your face, making phone calls without losing focus from the round much easier. The microphone is generally good, much better than expected. It did catch my voice to the other person and left out most of the background noise.

While the power output and RMS output are not the greatest (which it never seems to be on Pioneer head units), it provides enough power for most people. If you are an audiophile, my guess is that you are willing to spend much more than 200 on a head unit, thus, this head unit is not for you. However, for someone that is looking to get some new features in their car and get a slightly better sound but at a reasonable cost, the Pioneer AVH-290BT is the best bet. 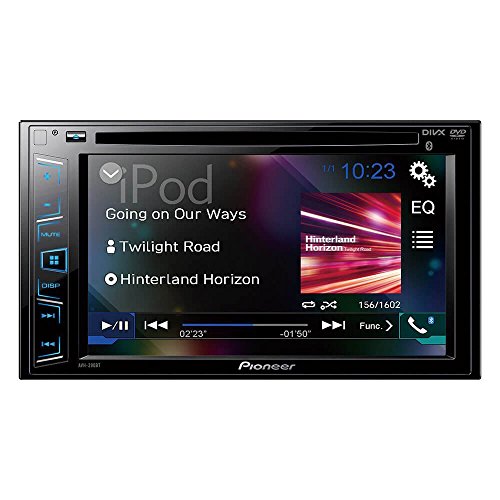 If the AVH-290BT is not for you, there are of course other double din head units priced under 200. One of those is the Kenwood DDX25BT. It has a 6.2” touchscreen and it is very similar to the AVH-290BT but comes in a bit cheaper than the Pioneer one. The Kenwood features CD/DVD, Bluetooth and AUX or USB. Where it lacks in comparison to the AVH-290BT is the screen, in my option. The Pioneer one feels sharper and more the touchscreen more responsive than the Kenwood. On the other hand, Kenwood supports dual phone for handsfree calling, making it great for people like me, who has one private phone and one work phone.

Another alternative is the JVC KW-V130BT. Just as Kenwood, this one comes in a bit cheaper than the Pioneer. This is a double din head unit with a 6.2” touchscreen, just as the others. But JVC is standing out with their RMS output, which is 22W x 4 channels. This is about 8 watts more per channel than Pioneer. At this price point, that was not expected.

Where it falls short is in the little things. For example, it takes a very long time for the head unit to load when you start the car. It’s usually not uncommon for a head unit to take 20-30 seconds, but over a minute is not acceptable. The overall head unit also feels slow, like it’s trying to do more than it can handle.

All in all, these three head units mentioned above are very similar. However, only one can be the best and Pioneer AVH-290BT is the one that gives the best overall impression. It does what it should, and it does it great. It has a responsive touchscreen and is quick to react. The sound is not amazing, but it is not bad, and it is most likely better than your stock head unit.

If you are looking for the best double din head unit under 200, I would highly suggest the Pioneer AVH-290BT. You will be happy with it, I’m sure of it.