WAYB Pico Review – Is it just a pretty car seat? 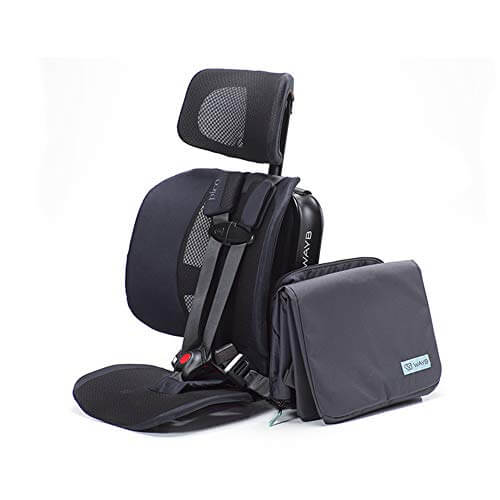 When three parents ask you about the car seat, then you’re…

on to something. This has happened to us while we were traveling. We were testing out the ultimate travel seat. Random parents stopped us, asking about the Pico.

Let me tell you this; it’s not a low key car seat. That’s for sure. One of them tried it up and decided then and there that they will buy it.

This car seat is not just for air travel. Since it’s light weight and easy to install, you can use it on any public transport an in ride-sharing services.

If you don’t want to pay $13 upwards for rentals, this is the best solution.

It’s a conversation starter. It’s a great way to meet new people during a layover. This car seat comes with a carry bag, but it looks quite silly on my husband’s back.

Before we get any further, let me give you a quick preview. This car seat isn’t just for traveling. It can become your regular car seat (for older children). It has a slim design, so 3 across won’t be a problem what so ever.

The mesh grid will keep your kids cool, no matter how hot it is outside. Did I mention that it’s made in the USA? Yes, the car seat is manufactured in California.

Let’s get this WAYB Pico review started. If you stick with me until the end, I will tell you the pros/cons. Some of them are unexpected, to say the least.

Who is the WAYB Pico Travel Car Seat?

This car seat is meant for family travels. It’s super light and portable—the Way Pico is meant for older kids. For families who are on the road, this is a Godsend.

Not to mention, it’s a great conversation starter.

What can the WAYB Pico car seat do for you?

The world doesn’t need another car seat. If you’ve seen one, you’ve seen them all. WAYB has managed to reinvent the car seat industry.

Take a look at the pictures. How cool is that? It’s like a high-end office chair in what your kids are sitting.

This is the lightest car seat I’ve ever had the pleasure to review. It’s featherweight, no kidding. With the massive 8 pounds, anybody can lift it and move it with ease, even grandparents. Take a look at the best car seat for grandparents post.

So how come it is so light and still function as a car seat?

Well, it’s quite simple actually. All the materials are high-tech. For example, the frame is made out of super light and super strong aluminum, which is typically used in the Aerospace industry.

It’s a premium product. There’s nothing that would suggest even a hint of cheapness. There’s no plastic sticking out or foam bulging. It’s a minimalist car seat that’s strong and light and comfortable at the same time.

This car seat is so slim that it fits in the back of Porche Carrera 3. That car has some small, and I do mean small backseats. Thanks to the WAYB, now this family can take the care and go on a cruise in safety.

As you have seen in the pictures, this car seat is for older children only, and it only supports front-facing positioning.

Last but not least, I want to mention the material. Since it’s mashed, it doesn’t overheat even in summer. Plus, it’s super easy to clean. What more do you need?

Every car seat will have people who will hate it with a passion and those who would never try any other brand. There’s no perfect one either. All of them have minor or major flaws. Let’s see what the drawbacks of the WAYB Pico are.

First of all, the price is high. I mean, you need a budget set aside, not to mention if you want to go 3 across the price is steep. It’s probably worth it because the seat is made out of high-tech materials.

This car seat is for bigger kids. Since it’s pricey, they should’ve gone with a bigger age range.

You indeed get a free travel bag with this car seat. There’s nothing extraordinary about it. It kind of feels cheap. The seat is just 8 pounds, but they could’ve added some padding to the straps of the travel bag. It’s quite large, and if you have to wear it for a long time, it starts to cut into the shoulders.

Some people questioned the safety values. Those are legit. If there would be problems, then there would’ve been a recall already.

By far, the price is the biggest issue for most. What do you think are these a turn-off? If not, let’s continue with the review.

How To Get The Most Out Of WAYB Pico Travel Car Seat?

The WAYB Pico is easy to install. Though make sure it’s nice and snug. After installation, it shouldn’t move. No matter what kind of car seat you’re using, the biggest problems occur when they are not installed properly.

The next thing you should consider is the right place to install it. The safest spot for your child is in the middle. Now there are certain preferences when you can’t mount it in the middle. Then your next safe spot is the driver’s side.

The simple latch system makes the installation a breeze. This car seat is particularly friendly to families who use ride-sharing and other transportations.

Conclusion for the WAYB Pico Review

The WAYB has outdone them. At first glances, it looks like any ordinary travel seat. But it’s not. It’s a car seat as well, and it has the safety ratings to prove it. It has both NTSB and FAA approval. So all you need to do is fold it and go.

If you live in a hot climate, the breathable fabric will make the kid’s life much easier.

We have reached the end of the WAYB Pico review. I hope you have learned valuable information about this car seat. Now it’s time to get it if it’s the right fit for you.

Maybe you have experience with this car seat? Do share below. Also, if you have questions, reach out to me, and I will try to help you out.

Yes the WAYB Pico is safe. It has passed the safety standards. Your child will be protected. All car seats have to go through safety testing.

What is the best car seat for traveling?

The best car seat for traveling is the Graco Extend2Fit and WAYB Pico is closed second. Maybe in the future, I will make a best article.

Yes, travel car seats are safe. They have to pass the same rigorous tests as any other child seat.

What other car seats would be able to compete with this Wayb Pico car seat?

In the travel category there are only a handful of contenders for the Wayb Pico Car seat. One of them would be Cosco scenera next. Since it has an aluminium frame it’s so lightweight.

How can I install the Wayb pico car seat?

You can go with the latch install which is the easiest. Or you could choose the seatbelt installation. What you need to know about the seat belt installation is that you have to guide it through the belt path. So the shoulder belt becomes the lap belt. This car seat was meant to be installed in forward facing mode only.

Does the Wayb pico car seat have a 5 point harness?

Yes, it has a 5 point harness. It can be used as a harness seat or one of the travel seats.

Can it be used as an infant car seat?

No, as a matter of fact not even a 1 year old should use it. It’s meant to be used from two years old and above. Infant seats are much more robust. If you want the best infant seat check out this pot.

Do these car seats come with travel back?

Where can you use these car seats the best?

The best use comes from rental cars and airplane use. As you know with a rental car you get an uncomfortable car seat. This car seat is different it fits in an airplane seat. Also, it’s popular amongst ridesharing services.

Can you fix the car seat?

Yes you can use the top tether anchor strap. Make sure your car has an anchor position. Otherwise you won’t be able to use the tether anchor.

This is meant for bigger kids who want to travel on the plane. It’s one of the secret travel tips when going with children.

Can it be used as a booster seat?

No. WayB recommends to be used only up to 50 pounds.

What are the best seating positions?