What are the Rhode Island Car Seat Laws?

Find out exactly the laws about booster seats, rear-facing, taxis and everything there’s to know on how to keep your child safe.

Car seat laws are changing, and I’ve decided to make it simple to find exactly what you’re looking for. We are on the road all the time, and we have to keep our kids safe, and avoiding fines is a bonus.

You see, I’ve looked at the law and translated that dry and hard-to-understand language into a simple and parent-friendly text. Now you will know exactly what to do. 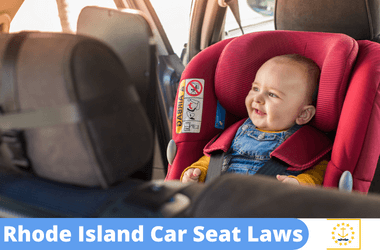 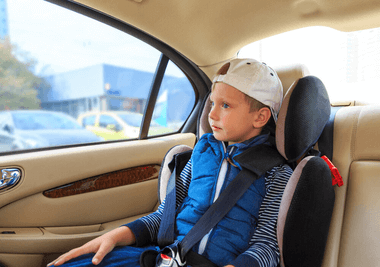 Booster seats are mandatory for all kids under the age of 8, or their height is below 57” or they weigh less than 80 pounds.

In essence, you will need a booster seat until the age of eight if you live in Rhode Island.

If you have kids under the age of 2 or they weigh less than 30 pounds, then you will have to keep them in rear-facing mode.

Forward-facing car seats can be used after your child has reached 2 years. The law also states that it’s a good idea to keep your child in rear-facing mode after the age of two until they have outgrown their seat either by weight or height.

Taxis are not exempt from the car seat law. This means that you need to provide a car seat when traveling by taxi or arrange ahead of time with the company.

And by taxi, I mean all other ridesharing options like Uber, Lyft and others.

When Can My Child Sit in the Front Seat in Rhode Island?

According to the law, your child can seat in front in case there’s no back seat, or it’s occupied by other children.

Law: If you have kids under 8 or they are less than 57 inches in height, and their weight is under 80 pounds, they have to be protected with a child restraint system approved FMVSS 213.

Location in the car:  The law is quite clear kids under 8 have to sit in one of the back seats if available.

Taxi: Taxis in Rhode Island are not exempt from the above laws.

RideSafer legal: Yes, it is legal and can be used with kids who are at least 3 years and weigh 30 pounds.

At the moment, there’s no law against leaving your child in the car alone. However, there are no guarantees that the watchful eye of the law does not arrest or fine you for the simple reason of child neglect.

Is it Illegal to Smoke in a Car with a Child in Rhode Island?

There are no laws in Rhode Island banning smoking in the car while having kids on board. I highly advise not to smoke while driving your kids because of secondhand causes many thousand deaths every year in the states.

We have reached the end of this article about car seat safety. I’ve done my best to make the article as reader-friendly as possible. Also, I’ve translated the dry law into something easy to understand.

We’re in the same boat, fellow parents. We all want to keep our kids safe because it’s our duty.

I’ve covered everything there’s about and just in case I’ve missed something, let me know, and I’ll do my best to update.

Are you planning a trip to Massachusetts?

Related: What are the MA car seat laws?

What are the car seat laws in Rhode Island?

According to Rhode Island car seat law, your child has to be rear-facing until 2. Also, if your child is between 2 and 8, they have to be secured either by a car seat or a safety harness.

When can a child not use a booster seat in RI?

If your child is over 8-years-old and has a height over 57” and weight more than 80 pounds, they are not required to use a booster car seat in Rhode Island.

Does an 8-year-old need a car seat?

No, your 8 year old won’t need a car seat in Rhode Island if their height is more than 57” and they weigh more than 80 pounds.

When can a child sit in a car without a car seat?

According to Rhode Island, car seat law, children above the age of 8 who are taller than 57” and weigh more than 80 pounds can sit in a car without car seat.

What state has the strictest car seat laws?

The State of Ohio has the strictest car seat laws.

When can my child sit in the front seat in Rhode Island?

A child can sit in the front seat if  they are older than 8 years old according to car seat laws. However experts suggest that only kids older than 13 should be sitting in the front seat. So if your child is younger than 8 they have to sit on the back seat (rear seat).

How do you install a child restraint system?

Car seats or the safety belt which one to use?

When we’re talking about a child restraint system then both car seats and safety belt applies. The one the fits your child’s height the best is the one you should use. Also keep in mind that rear seating position is for all younger than 8 years old.

What are the booster seat requirements in RI?

Are RI car seat laws different from other states?

Yes, car seat laws vary from state to state. It is important to familiarize yourself with the car seat laws of the state you will be traveling to.

When can my child sit in the front seat in Rhode Island?

How old do you have to be to sit in the front seat in rhode island?