What are the Nebraska Car Seat Laws? 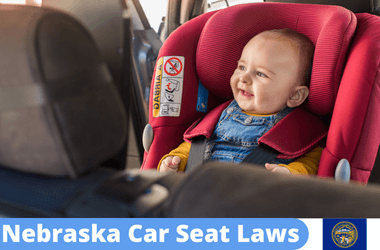 Looking to find everything there’s it knows about car seat laws in the state of Nebraska? You have found just the right place.

Being a mom of 3 and a frequent traveler, I have to be up to date with car seat laws in different states because I don’t want to get fined.

I have three perfect angels (when they are asleep, well mostly…), and before them, I was a paralegal, so I know how to understand and find the meaning of law texts.

I’ve decided to put together this easy-to-use article in common language so even the most sleep-deprived parent gets it instantly.

You see, I’ve answered all the most common questions below so you can keep your kids safe and fine-free for the years to come. Maybe you’re looking for booster seat laws, rear-forward facing car seat requirements or maybe you want to know if you need a car seat with a taxi, no problem, I have the answers below and then some. 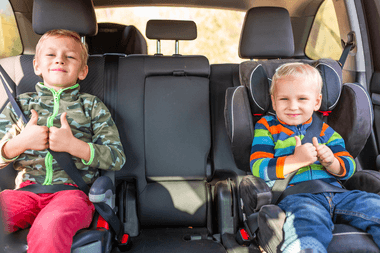 According to the car seat laws in Nebraska, all kids under the age of 8 have to be secured in a car seat that is appropriate for them and are federally approved.

So there’s no exact law on when to start using the booster seat. This means we have to check the manufacturer’s recommendations. Typically in the age range of 4 and 8, kids are using booster seats. And as soon as your child reaches 8, they can transition into seat belt restraint.

There’s a clear law about this, and it goes like this if your child is below 2, they need to be in rear-facing mode until they outgrow their seat according to the manufacturer’s upper limits.

There’s no concrete law for this; however, once the rear-facing car seat is outgrown around the age of 2 you can start using a forward facing car seat.

Typically these are used between the ages of 2 and 4. From the age of four, you can transition your child into a booster car seat.

Taxis in the state of Nebraska are exempt from the car seat laws mentioned above according to subsection (3).

To keep your child safe, make sure you bring your own car seat because you can never know.

When Can My Child Sit in the Front Seat in Nebraska?

According to the law, all kids under the age of 8 have to sit in the back seat. The exceptions are for those that don’t have a second row, or younger children are taking up space in the back.

Location in car: According to the law, kids under the age of 8 have to sit in the rear.

Taxi: Taxis are exempt from the above car seat laws; however, I strongly suggest bringing your own car seat because that’s the safest way to travel.

What is the law concerning Leaving kids in the Car in Nebraska?

According to the child protection act of Nebraska, it’s illegal to leave a child under the age of 6 in the car unattended.

Is it Illegal to Smoke in a Car with a Child in Nebraska?

At the moment, there are no laws governing the right to smoke while transporting kids in a vehicle. However, I strongly advocate holding off smoking while driving because second-hand smoking causes serious disease.

We have reached the end of this article. I told you I would keep the lawyer talk to the minimum so you can get everything instantly.

I hope by now you have found the answers to your question. If not, you can always contact me, and I will get back to you as soon as possible. Also, if you want more detailed info, let me know. I will gladly help.

Crossing state lines means new rules so here you can find the newest Iowa car seat laws so you will know how to keep your little ones safe.

What is the car seat law in Nebraska?

When can a child sit forward-facing in Nebraska?

According to Nebraska’s car seat laws, a child can use a forward-facing car seat when they reach the age of 2.

What is the age, weight, and height for a booster seat?

There’s no maximum age for a booster seat; however, most manufacturers have the upper limit of 80 pounds and height of 57.”

What age are booster seats for?

Typically booster seats are used between the ages of 4 and 8.

How long can you use a convertible car seat for?

The convertible car seat is like just any other car seats or child safety seat or child restraint system and serves to protect in a car accident. Convertibles have rear facing and forward facing optoins. This child passenger safety seat has maximum weight and height limits set by the manufacturer. The rear facing usually taps out at 2 years old in a motor vehicle. And the forward facing car seats mode usually reaches the max at 4 years old in a motor vehicle.

Car seats or seat belts for my child?

It really depends if the child is big enough for seat belts then you can use them if they are still get more protection from car seats then you should stick with them. The car seat helps to give that extra protection that a seat belt can’t.

Which are the best car seats?

I’ve a dedicated article just for that you can read all about the very best car seats right here.