What are the Iowa Car Seat Laws? 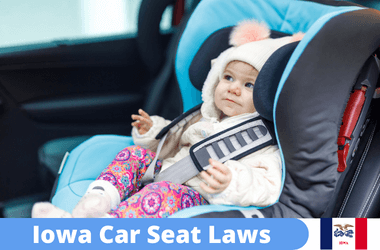 You’ve just found the perfect spot to brush up on your know-how regarding car seat laws in the state of Iowa.

I’m a mother of 3 perfect little angels (mostly while they are sleeping), and we travel a lot, so I have no choice but to check up on the car seat laws in the states.

Also, I’ve used to be a paralegal before I became a full-time mom. So I know exactly how to translate lawyer talk into something that even the most sleep-deprived parent will understand.

I’ve read everything there is about car seat laws, and I’m presenting it in an easy-to-read format.

So no matter if you want to know the current booster seat laws or when to switch between the rear of forward-facing or maybe you’re interested in taxi laws, I have the answers for these questions and then some. 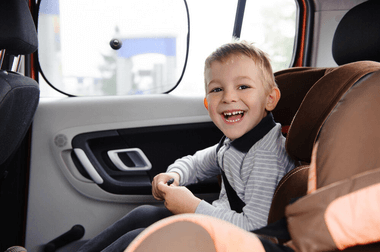 In the state of Iowa, there’s no exact booster seat law. However, we can conclude the following: kids until the age of 6 have to use a car seat that is appropriate to their height and weight.

So if we interpret the law, you will have to keep your child in a booster seat until the age of 6. Between the age of 6 and 18, the seat belt is the preferred choice for safety.

The law is clear in this regard. If you have a child under 1 year and weighs less than 20 pounds, they must be in a rear-facing car seat.

It is known that rear-facing is the safest way for kids to travel, so if you want to be extra safe, you can keep your little one in rear-facing mode until the age of 2.

The law states that kids under the age of one and weighing less than 20 pounds have to be in a rear-facing seat, so when this limit is reached, then they can upgrade to a forward-facing car seat.

Although I wouldn’t rush it because rear-facing is much safer than forward-facing.

Taxis in the state of Iowa are not exempt from the car seat laws mentioned above. Furthermore, parents will be held accountable if there’s no car seat during the ride.

The best thing to keep your kids safe and avoid those fines is to bring your own car seat or try to prearrange it ahead of time.

When Can My Child Sit in the Front Seat in Iowa?

There’s nothing exact about when a child can sit in the front. Some states require for the child to be 12 or 13 years old. In Iowa, there’s no such thing, so you have to common sense and if the car seat manufacturer allows front seat installation.

Law: If you have a child under 6 years old, then they have to be secured by the proposed manufacturer’s recommendations for child restraint system the following way:

Location in car: There are no specifications on where can or can’t a child sit at a certain age.

Taxi: Taxis are not exempt from the car seat laws from above. So your best choice is either to have the car seat with you or arrange it ahead of time.

What is the law concerning Leaving kids in the Car in Iowa?

There’s no law prohibiting leaving a child unattended in a vehicle. To keep your kids as safe as possible, I recommend taking your child with you or having a 12-year-old next to them.

Is it Illegal to Smoke in a Car with a Child in Iowa?

Smoking is not illegal while driving a child. However, I strongly advocate holding off on smoking because secondhand smoke is known to cause severe illnesses.

We have reached the end of this article. I hope you’ve found the answers you’ve been looking for.

I’ve done my best to translate that dry lawyer jargon into something easy to read and comprehend.

Now maybe you have questions? No problem, reach out, and I will do my best to get you the answers you may need.

Do you have children with you when traveling to Illinois?

Make sure you are aware of the Illinois car seat laws before you go on any trips. Breaking the law can lead to fines, and in the worst case, could put your child in danger.

What are the child seat laws in Iowa?

The car seat laws state in Iowa that kids under the age of 1 and weighing less than 20 pounds have to be in a rear-facing car seat. Between the ages of 1-6, they have to have an appropriate car seat. Above the age of 6 seat belts can be used to secure them.

When can a child legally sit in the front seat in Iowa?

There’s no exact law when a child can sit in the front in the state of Iowa. Other states recommend that kids either have 12-13 years of age.

What is the height and weight of a booster seat?

The minimum weight requirements for booster seats vary from brand to brand and product to product. However, the most common number is 40 to 65 pounds. The upper height limit for booster seats would be 57 inches.

What kind of child restraint system do 2 years old need?

How much do you have to weigh to sit in the front seat in Iowa?

There is no rule in Iowa about when a child can sit in the front seat, but most car seat manufacturers recommend waiting until the child is at least 12 years old.

What is the height & weight for sitting in front seat in Iowa?

You will have to keep your child in a booster seat until the age of 6, according to the law. However, between the ages of 6 and 18, it is safer for them to use a seat belt.

What are the booster seat laws in Iowa?

What is the height and weight requirement for a booster seat in Iowa?

What are the consequences of not following Iowa’s child seat laws?

If you are caught breaking the law, you may be subject to a fine. In the worst-case scenario, your child could be injured if they are not properly secured in a seat.

What are the age requirements for car seats in Iowa?

The car seat laws in Iowa state that children under the age of 1 and weighing less than 20 pounds have to be in a rear-facing car seat. Between the ages of 1-6, they have to have a booster car seat. Above the age of 6 seat belts can be used to secure them.