It’s scary to look at a head flop (bobbing) but is it that dangerous and painful?

I have three kids in different age ranges so I had my fair share of head slumps. The first time was the scariest then I’ve learned how to handle it.

Even now when my eldest is 9 year old she has had slumps once in a while. When she wakes up and ask if something hurts she never complaints.

After doing my fair share of research I know that head slumps are not dangerous in most cases and if you’re looking to solve it I have made this short article just for that. 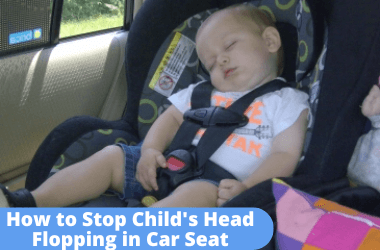 What You Need To Know About The Car Seat Head Flop

When a baby’s head falls forward in a car seat, it can be scary. But don’t worry! It’s not that uncomfortable from the other side.

With bigger babies and toddlers there are no risks at all blocking the airways. With smaller babies there are some minor issues. As soon as they have good control of their neck muscles it wouldn’t be an issue.

As your child grows they will feel if their neck isn’t in the right position so they will automatically adjust and won’t wake up in pain.

A contrary example is from a friend of mine who has a special child. They went a mile and above the needs when it comes to their son.

You see whenever his head would flop his breathing would stop and they had to rush him to the ER. This is the only case I know when a head slump would be dangerous. Neither my three kids or others have experienced this.

Is It Safe For Your Child’s Head To Fall Forward In A Car Seat?

Some people worry that when a baby falls asleep their head might slump forward in the car seat. But it is safe for the baby’s head to fall forward a little bit. This is because the baby’s head is supported by the car seat and they are not in any danger.

The baby’s head is not heavy enough to cause any problems. However, if a baby stays slumped in the car seat for a long time then they might get a stiff neck or a headache.

This can happen when you leave them in the car seat for too long after they were to exhausted and have fallen asleep like so.

It would be very uncomfortable for your child if their head constantly fell forward.

This is because the chin would rest on their chest and rub against it. It might also cause the baby to have a stiff neck over time so it’s best to prevent this from happening as much as possible.

Is it necessary to use a pillow or straps to keep your child’s head up in their car seat?

If you think about it logically then it wouldn’t be necessary to use a pillow or straps to hold up your baby’s head in the car seat.

The reason for this is that their head would move along with the movement of the car. This means that if you are driving on bumpy roads or turning corners, their head would lean too much and it would be uncomfortable for them.

If you put a pillow under your baby’s head in the car seat then this could cause an obstruction. This is because the baby would lean back and their head might fall to one side as they sleep slipping into a slump position.

The worst thing to do is putting a “U” shaped towel or blanket around their head because over time it will slip behind your little one’s head and cause excess strain on the neck. 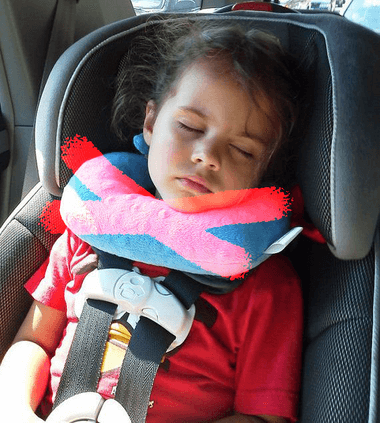 From my research I can say that in most cases if you have the right car seat in the right vehicle the #1 cause of bobbing heads and head slumps is the lose strap. As soon as it’s tight it goes away.

How to stop child’s head flopping in car seat? 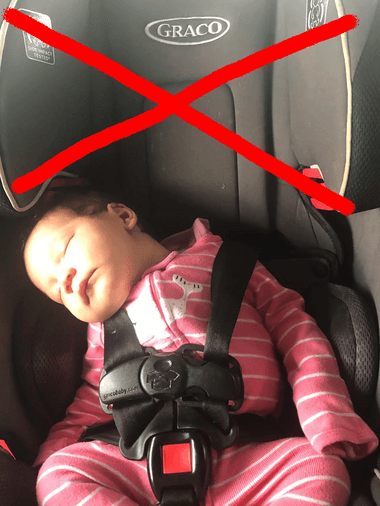 It’s quite easy to stop child’s head flopping in the car seat.

If it’s possible try to adjust the angle of the seat. When I notice that my child is flopping way too much then I try to tilt it back. I know if the car seat doesn’t have enough options then this is out of the question.

The best way to stop the floppy head syndrome is by adjusting the straps. These straps have to be tight or they won’t do their job plus the head will flop.

We hope these tips have helped you to know how to stop baby head slumping in the car seat.

As a final note, remember that babies are flexible and will automatically adjust their position if it becomes uncomfortable for them. So don’t worry too much about your little one’s head falling forward when they’re sleeping-they’ll be just fine!

All in all the head slumps are harder to watch than experience. We have to have a bit of faith in your child even if it’s a baby.

If you loved my article I would appreciate if you would share it. Just in case you have tips or questions feel free to contact me.

How do I keep my baby’s head up in the car seat?

There are a few ways that you can prevent your baby’s head from falling forward in the car seat. One way is to make sure that the car seat is positioned (the appropriate tilt) correctly and that the straps are tight. The chestplate is right under the armpit level this would be sufficient to protect your baby from head slumps.

If nothing has worked for you from above then there are special straps called head bands that will keep your child’s head falling forward.

Is it OK for baby to sleep in car seat with head down?

It is okay for baby’s to sleep with their heads down as long as they are in a safe position. It would be good if you could have your baby’s head up a bit though so that they don’t turn into a slump or bobble-head doll.

Why does my baby’s head tilt in car seat?

If your baby’s head tilts forward in the car seat you might want to make sure that there’s nothing under their back and that the straps are tightly fastened. If this doesn’t solve the problem then it may be because they don’t like how tight or loose the straps are.

How to stop toddler head flopping in car seat?

Typically it’s not an issue if a toddler’s head flops in the car seat. By the toddler age kids have good control over their neck muscles and they can correct their posture even while they are asleep. If it’s a longer period than they might get a sore neck. To stop it make sure that the straps are tight and the chest plate is at the right position plus the seat is sufficiently tilted.

How to stop baby head falling forward in car seat?

For small babies who don’t have sufficient control over their neck muscles a forward falling head might be an issue if it lasts long. To stop this from happening all you need is to adjust the car seat tilt and also make sure that the straps are tight and the chest plate is at armpit level. That’s it.

How to keep baby’s head up in car seat?

It’s quite simple to keep the baby’s head up in the car seat. If they have good control over their neck muscles then they will automatically adjust. If not then make sure that the car seat is sufficiently tilted backwards, the straps are tight and the chestplate is at armpit level. Also if the head is titled to the side it’s not an issue because the car seat offers good head support.

What happens if a baby’s head falls forward?

If a baby’s head falls forward, it may cause the baby to experience discomfort or pain.

However, it is safe for the baby’s head to fall forward slightly. To prevent this from happening, make sure that the car seat is positioned correctly.

Should I be worried if a baby’s head falls forward in car seat when asleep?

What is the best way to stop your children’s head from flopping around?

Children in car seats often have their heads flopping around, which can be jarring and uncomfortable for them. There are a few different things you can do to stop this from happening. First, make sure that the car seat is properly reclined at the correct angle. This will help to support the child’s head and prevent it from flopping around. Second, tighten the harness so that it is snug against the child’s body. This will help to keep the child in place and prevent their head from moving around. Finally, make sure that the car seat is properly installed according to the manufacturer’s instructions. This is essential for safety in case of a crash. By following these simple tips, you can help to stop your child’s head from flopping around in their car seat.

Most manufacturers now include things like shoulder straps and a headrest as part of the car seat, but there are things you can do to make sure your baby is comfortable and secure.
The most important part is to make sure the harness straps are properly positioned. The straps should be at or below your baby’s shoulders, and they should be snug enough that you can’t fit more than one finger under them.
You also want to recline the car seat so that your baby’s spine is in a neutral position. This will help to support their head and prevent it from flopping around. Finally, make sure the headrest is properly positioned so that it provides support for your baby’s head and neck.
By following these simple tips, you can help to prevent your baby’s head from flopping around in their car seat.

Should I be worried if my newborn head flops in the car seat?

Any parent who has taken a car ride with a newborn knows that head flops can be a common occurrence. The head flops forward when the baby falls asleep, and it can be quite frightening for a parent to see. Car seat manufacturers have designed seats specifically for infants in order to avoid this problem. The seats are usually smaller and have more support for the head and neck. In addition, many car seats now come with an adjustable base that can be used to prop up the head and prevent it from flopping forward. By using an infant car seat, parents can avoid the worry and stress of head flops.