Do Car Seats Need to Be Replaced After an Accident? – Expert Anwers

NO, the car seat doesn’t need to be replaced after a minor accident, however…

There’s a bit of contradiction, while the NHTSA says that you don’t need to replace it during a minor crash certain manufacturers require it. Then who should you believe?

The NHTSA does mention that you should always look at manufacturer’s recommendation. I know for a fact that both Graco and Chicco says that you must replace the car seat.

OK, and what’s a minor accident and who pays for the new seat? I will answer this question in a bit and also I will share with you when it’s an absolute must and what can you do with a damaged car seat. 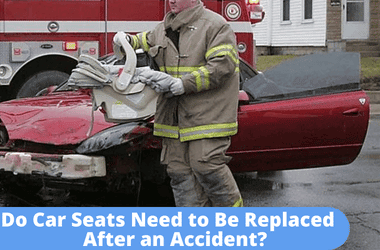 When Is Car Seat Replacement Advised?

If your were involved in an accident even if your kids weren’t sitting in their car seat at the time, then it’s important to replace your current seat with a new one.

The reason is that after being involved in such an incident, the crash forces could have bent or broken any frame components which may compromise safety and effectiveness of the device.

Suppose another accident would happen than the damaged car seat wouldn’t be able to give the maximum protection.

Maybe it was just a simple fender-bender or as the NHTSA says minor crash then you don’t need to replace it however make sure you check the manufacturer’s recommendations.

In other words when an accident occurs, car seat replacement is advised (not mandatory) even if the child wasn’t in the car seat.

This is because even a small accident can cause damage to the car seat that may not be visible. Therefore, it is always better to be safe than sorry.

What is a Minor Accident?

According to the NHTSA a minor accident can be classified as the following:

Now you know what’s a minor accident according to the NHTSA. Also this doesn’t guarantee you that the car seat will do it’s job in an accident in the future.

It is important to replace your car seat after a crash because the seat may be damaged and not offer the protection you need in the event of another crash.

Safety should always be a top priority when it comes to your family, and that includes making sure you have the proper car seats installed in your vehicle.

There might be structural damages inside the car seat so it might not be as safe as it used to be after a car accident. In addition, the seat belt might have been damaged as well and still pose a threat to you or your child, therefore it is essential that you replace both the car seat and the seat belt.

Also there could be invisible damages to the car seat like micro fractures or fissure inside which means it is not structurally safe.

If you still think that there are no visible changes to your car seat, you should not use it right away after the crash. Do an inspection on your own before using it again. When inspecting, look at the material and stitching for any visible signs of damage like cuts or tears. Do the same with the belt or the harness; check for any broken pieces, marks, and tears. Do not use it if you find anything wrong.

Do you need to replace even a booster seat?

Unfortunately yes you have to replace even a booster seat. The reason behind it is simple. The booster is like any other car seat so it can have the same visible or invisible damage.

Who Is Responsible for Paying to Replace a Car Seat?

Replacing a car seat after an accident can be costly, but who is responsible for paying for it? Most people assume that the insurance company will cover the cost, but this is not always the case.

There are a few sticklers who are making it as difficult as possible to get your car seat covered. You have to do your own homework for that.

In other words, even if you do need a new car seat, it doesn’t have to be the same brand and model.

When Does the Insurance Company Cover the Replacement Costs?

Replacement costs for car seats are typically covered by insurance companies. In most cases, you are required to have car seat replacement coverage as part of your policy.

It’s always good to contact the insurance company first and typically you buy the replacement car seat and after providing proof you will get reimbursement.

What do you do with the crashed seat after you replaced it?

After you have replaced the crashed seat, you should dispose of the old one. The old seat should not be used again, as it may not be safe.

For this reason you have to make sure that nobody else can use it either. Cut the straps and put a sign on it that it’s useless.

There are some cities that offer to recycle the car seat, so it’s a good idea to check your municipality.

Conclusions Do Car Seats Need to Be Replaced After an Accident

Replacing a car seat after an accident is important for ensuring your safety in the event of another crash.

Most insurance companies will cover the cost of replacement, but there are a few sticklers who make it difficult to get reimbursed.

It’s always good to contact the insurance company first. If you’re not sure whether or not your car seat needs to be replaced, do an inspection on your own before using it again.

Make sure to dispose of the old seat properly and check with your municipality to see if they offer recycling services for car seats.

By now you should know when you absolutely have to replace your car seat and who’s going to pay for it.

Do insurance companies have to replace car seats?

Yes, in most cases insurance companies pay for the car seat reimbursements. There are some who make it difficult while others are doing it without questions asked.

Should I replace my car seat after an accident?

According to the NHTSA it’s an absolute must to replace your car seat in case of a moderate or severe crash. This is the only way to keep the children safe.

Can you reuse car seat after accident?

No, you shouldn’t reuse the car seat after the accident. Also make sure you make it unusable and get a replacement car seat as soon as possible.

What should be done with a car seat that has been in an accident?

You should recycle the car seat if it’s possible in your area and also make sure to make it unusable by cutting the straps and use a permanent marker to write danger on it.

Will Graco replace a car seat after accident?

No, Graco won’t replace a car seat after an accident. You best shot is with the insurance company.

When should you replace a car seat?

A car seat should be replaced either if it was in a serious accident or it has expired.

Why do insurance companies ask about car seats?

Insurance companies ask about car seats because if the vehicle was in an accident then it won’t be safe to use. In most cases you will be reimbursed for the car seat.

Why can’t you use a car seat after an accident?

You can’t use a car seat after and accident because it has done it’s part protecting your child and there might be micro fractures or other hidden damage which will not guarantee that it will do it’s job if another accident happens.