What are Alabama Car Seat Laws?

If you’re looking for answers about child car seat laws in the state of Alabama you have just found the right place.

I’m a mom of 3 adorable angels (in their sleep, mostly…) also in my previous life before the kids I was a paralegal and we travel a lot so this means I have to know the car seat laws.

Now I know how daunting is to find the right law and then the dryness doesn’t help either. This is why I’ve decided to create this article to help you out. And best of all I will be using simple language so even the most sleep-deprived parent will understand what I’m talking about.

Suppose you’re looking for the booster seat law, or maybe you want to find out when can you switch from rear facing to forward facing mode, or if you need a car seat in a taxi all these and other important questions will be answered below. 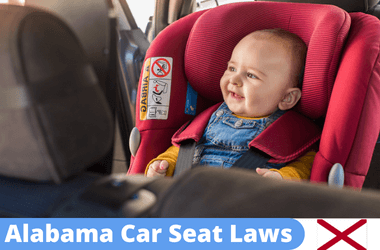 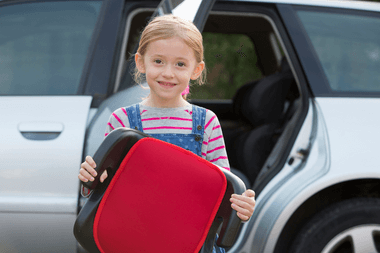 According to the booster seat law in the state of Alabama, it is mandatory until the age of 6. Now, this isn’t the safest choice though. If you want to keep your child out of harm’s way it’s a good idea to keep them in the booster seat until they reach the height of 57 inches.

According to the law, your child should be rear facing until they reach the age of 1 or their weight surpasses 20 pounds.

Again if you want to keep your child safe the best thing to do is extend the rear facing until the age of two or until they outgrow their rear facing seats.

The law clearly states that taxis and ride sharing services are exempt from the laws above. However, if you want to keep your kids safe make sure you bring your car seat you never know what will happen.

When Can My Child Sit in the Front Seat in Alabama?

There’s no concrete law that would limit a child when they can sit in the front seat. When we ask the experts they recommend that only 13 year old and above kids should sit in the front.

Here you can find the entire law at one place:

Law:  According to the law all kids under the age of 6 have to be restrained by the appropriate car seat that meets FMVSS 213

Location in car: There are no specifics on when can a child sit in the front.

Taxi: Taxis are exempt from the car seat laws mentioned above. And if you want to keep your kids extra safe bring your own car seat.

RideSafer legal: Yes. The Ride Safer travel vest qualifies for children 3 and 30 pounds and up.

Law: All passenger are required to use a seat belt until the age of 15

The law on child in front seat of you car in Alabama doesn’t give a specific age when your child can sit in the front seat. However, you can’t put a rear facing car seat in front.

What is the law concerning Leaving kids in the Car in Alabama?

According to the law it’s illegal to leave a child alone in a car because of the risk of injury. If the car interior temperature is below 99 degrees then it’s presumed safe.

Is it Illegal to Smoke in a Car with a Child in Alabama?

At the moment it’s still legal to smoke however there’s a law in the works that would ban smoking while a child under the age of 14 is in the vehicle. The bill has passed the house and it’s in the senate.

We have reached the end of this article. I hope you have learned something valuable form the above and now you know how to keep your child safe and avoid those hefty fines.

As you have seen it I’ve done my best to translate lawyer talk into simple to understand chunks. So now it’s your turn and put it to good use.

Maybe you have questions or I’ve missed something? No biggie just shoot me a message and I will do my best to reply.

Are you planning a trip to Georgia?

It’s your responsibility as a parent to know the Georgia car seat laws to keep your kids safe. I’ve done my best to get you the newest laws.

Are you traveling to Florida with your kids?

As safety conscious parents it’s our duty to know exactly what are the Florida car seat laws and apply them when we’re out of state.

What are the height and weight requirements for a booster seat in Alabama?

There’s no law for weight and height requirements for a booster seat in the state of Alabama. In this case you need to check the manufacturer’s recommendations.

When can a child legally sit in the front seat in Alabama?

There’s no exact law that would determine when can a child sit in the front, however experts agree that the age of 13 is the best safest to start.

What age are booster seats for?

In the state of Alabama you can use the booster seat until the age of 6. And if we follow manufacturer’s recommendation you can use if from the age of 4.

Can I be pulled over for not having a child in a car seat in Alabama?

Are there special requirements for convertible seats in the Alabama law (Alabama child restraints law)?

According to the Alabama law (Alabama law enforcement agency, Alabama child restraint law)  there’s no special section for them. You can treat convertible seats either as a rear facing car seat or as forward facing seats and that section of the law applies. So you need to use the appropriate child passenger restraint this can be a child car seat or vehicle seat belt (seat belts) in motor vehicles.

What does the alabama law says about the child passenger restraint system?

When can a child ride in front seat in Alabama?

The law on child in front seat of you car in Alabama doesn’t give a specific age when your child can sit in the front seat. However, you can’t put a rear facing car seat in front.

How much is a no child restraint ticket in Alabama?

Alabama’s child restraint laws state that drivers who are caught violating the law will be looking at a fine of $25 for each offense. For a first offense, a driver will have one point assessed. A second or subsequent offense will result in two points.

What is the age requirement for booster seats in Alabama?

Children must use booster seats in Alabama until they are six years old.

In Alabama, all drivers are required to follow the car seat laws set forth by the Alabama Law Enforcement Agency (ALEA). These laws are designed to keep children safe while driving, and failure to comply can result in a fine of up to $25. The laws state that all children under the age of six must be properly secured in a car seat or booster seat. Additionally, all children under the age of thirteen must be properly secured in a seat belt. To help enforce these laws, the ALEA Highway Patrol conducts regular campaigns to check for compliance. Officers will pull over drivers who they suspect are not following the law and issue a warning or citation as appropriate. The ALEA also provides educational materials on their website to help parents and guardians understand the importance of following the car seat laws. By obeying these laws, we can help keep our children safe on Alabama’s roads.

All infants and toddlers must be properly secured in a safety seat that is appropriate for their age, weight, and height. Once a child outgrows the child safety seat, he or she may be restrained by a lap belt or shoulder belt in the back seat of the vehicle. The use of safety seats and booster seats significantly reduces the risk of injuries and fatalities in car accidents. Alabama’s car seat laws are among the most stringent in the nation, and they help to make our highways and roadways safer for everyone.

What are the laws in Alabama for child car seats?

What is the legal age to sit in front seat in Alabama?

Alabama law doesn’t give a specific age when your child can sit in the front seat. However, it mentions that rear-facing seats should not be placed in the front while children are under the age of 13.

When can a child stop using a booster seat in Alabama?

When it comes to car seat laws, each state has its own set of regulations. In Alabama, these laws are designed to keep children safe in the event of an accident. All children under the age of six must be secured in a child safety seat with a five-point harness. The type of seat required depends on the child’s age, weight, and height. For infants and toddlers, this usually means using a rear-facing seat. As children get older and heavier, they can graduate to forward-facing seats and then booster seats. The content of the seats must also be taken into consideration. Seats that contain synthetic materials such as memory foam are not recommended as they tend to crumple under impact. Finally, the seating capacity of the vehicle must be considered. Children under the age of four should never ride in the front seat of a van or SUV. With so many factors to consider, it is no wonder that parents often find car seat shopping to be a daunting task. However, taking the time to select the right seat can make all the difference in keeping your child safe on the road.

Can a 10 year old sit in the front seat in Alabama?

How old does a kid have to be to sit in the front seat in Alabama?

What height does a child need to be for no booster seat?

There’s no height limit set for booster seats in Alabama only the age of 6. Typically in other states a child needs to use a booster seat until they reach 57 inches.

When can a child stop using a booster seat in Alabama?